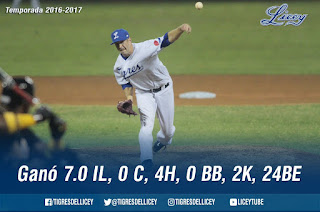 Ildemaro Vargas (former Palm Beach-Lara) started at second base and batted leadoff.  0-for-2 with two walks, one fielding error, and assisted in one double play.

Ronny Cedeno (former MLB signing-Zulia) started at third base and batted seventh.  0-for-4 with two strikeouts and one throwing error.

Notes:
Zulia won the series four games to one over Lara and will head to the Caribbean Series.

Eugenio Velez (former Memphis-Mochis) started in left field and batted leadoff.  1-for-3 with one double, one run, and two strikeouts.

Angel Castro (former Memphis-Cibaenas) entered in the eighth and pitched to two batters.  He allowed one hit, no runs, and struck one out. (ir-s:2-1)

Donovan Solano (former Memphis-Licey) started at second base and batted second.  1-for-4 with one hit by pitch and one strikeout.
Evan MacLane (former St. Louis-Licey) started and pitched seven innings.  He allowed four hits, no runs, and struck two out for the winning decision (3-0).  (g/f:8-4)

J.C. Romero (former St. Louis--Santurce) entered in the seventh and pitched to one batter.  He no hits or runs, and one walk.  (ir-s:1-0)

Randy Ruiz (former MiLB signing-Caguas) started as designated hitter and batted fourth.  1-for-6 with one run and two strikeouts.
Ruben Gotay (former Memphis-Caguas) started at first base and batted fifth.  1-for-4 with one run, two walks, two strikeouts, and one unassisted double play.
Joel Pineiro (former St. Louis-Caguas) entered in the 12th and pitched one inning.  He allowed no hits or runs, and one walk for the winning decision (1-0).  (g/f:0-1)

Notes:
Caguas wins the series over Santurce five games to three and will head to the Caribbean Series.

Malik Collymore (former Johnson City-Sydney) started in left field and batted leadoff.  1-for-5 with one run and one strikeout.

Notes:
Edgard Montiel (former DSL-Chinandega) has seen his level of play improve over the past year: La Prensa

Shohei Otani (Nippon Ham) will be used as a starting pitcher, but could also be used in a designated hitter or pinch-hit role.  Nobuhiro Matsuda (Softbank) will be used as primary third baseman: Yakyubaka
Posted by jrocke217 at 9:50 AM