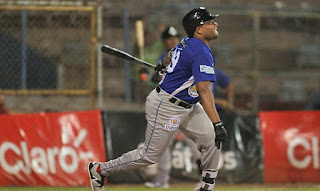 It has been 33 years since the last time that Lara and Zulia faced off in the championship: Lider

Ildemaro Vargas (former Palm Beach-Lara) is expected to rejoin Lara for the second game of the series: El Emergente

Eugenio Velez (former Memphis-Mochis) started in left field and batted leadoff.  0-for-2 with one walk.

Efren Navarro (former Memphis-Hermosillo) started at first base and batted fourth.  1-for-2 with one double, one RBI, two walks, one sac fly, one strikeout, and assisted in two double plays.

Notes:
Angel Castro (former Memphis-Cibaenas) will be moved from the rotation to bullpen: Listin Diario

Randy Ruiz (former MiLB signing-Caguas) started as designated hitter and batted fifth.  1-for-4 with one strikeout.
Ruben Gotay (former Memphis-Caguas) started at first base and batted sixth.  0-for-4 with one strikeout.
Joel Pineiro (former St. Louis-Caguas) entered in the seventh and pitched 1.2 innings.  He allowed three hits, no runs, and struck one out.  (g/f:2-2)(ir-s:1-1)

Fidencio Flores (former GCL-Rivas) entered in the fifth and pitched two innings.  He allowed no hits, one walk, and struck one out.  (g/f:5-1)

NPB, KBO, and CPBL are in discussions for a tournament of champions to take place in November: Yonhap News Agency