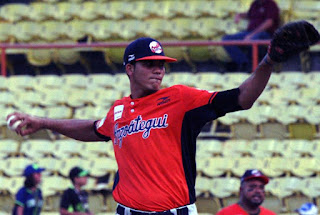 Ildemaro Vargas (former Palm Beach-Lara) started at second base and batted leadoff.  2-for-5 with one run and assisted in three double plays.

Roberto Canache (former Johnson City-Caribes) entered in the sixth and pitched one inning.  He allowed one hit, no runs, and struck one out.  (p-s:7-6)(g/f:1-0)
Pedro Rodriguez (former MiLB signing-Caribes) entered in the eighth and pitched one inning.  He allowed three hits, one earned run, and one home run.  (p-s:15-11)(g/f:0-1)

Ronny Cedeno (former MLB signing-Zulia) started at third base and batted ninth.  1-for-2 with one walk.

Efren Navarro (former Memphis-Hermosillo) started at first base and batted third.  0-for-3 with two walks, two strikeouts, and assisted in two double plays.

Eugenio Velez (former Memphis-Mochis) started in left field and batted leadoff.  1-for-4 with one home run, one RBI, one run, and one sacrifice.

Iker Franco (former Springfield-Culiacan) entered late in the game at catcher.
Dennys Reyes (former St. Louis-Culiacan) entered in the sixth and pitched to three batters.  He allowed no hits or runs, one walk, and threw one wild pitch.  (p-s:13-6)(g/f:2-0)

Donovan Solano (former Memphis-Licey) started at third base and batted seventh.  2-for-4 with one RBI, one run, and one stolen base.

Eliezer Alvarez (Peoria-Escogido) started at second base and batted second.  0-for-4 with two strikeouts.

Rainel Rosario (former Springfield-Escogido) started in right field and batted fifth.  1-for-4 at the plate.

Notes:
Venezuela will play Kansas City and Texas in exhibition games during spring training: Lider
Posted by jrocke217 at 10:38 AM