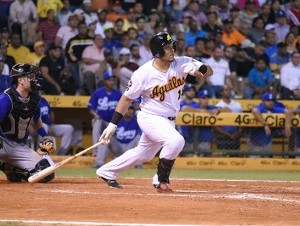 Ronny Cedeno (former MLB signing-Zulia) started at third base and batted seventh.  1-for-3 with one run, one strikeout, and assisted in one double play.

Ildemaro Vargas (former Palm Beach-Lara) started at second base and batted leadoff.  0-for-3 with one RBI, one run, one walk, and one sac fly.

Jose Martinez (St. Louis-La Guaira) started in right field and batted fourth.  1-for-4 with one walk and one strikeout.

Efren Navarro (Memphis-Hermosillo) started at first base and batted third.  3-for-5 with one home run, two RBIs, two runs, one strikeout, and one fielding error.
Luis Garcia (former New Haven-Hermosillo) entered late in the game as a pinch hitter and batted eighth.  One walk at the plate.

Eugenio Velez (former Memphis-Mochis) started in left field and batted leadoff.  0-for-4 with two runs and one strikeout.

Niko Vasquez (former Springfield-Navojoa) started at shortstop and batted fifth.  2-for-4 with one strikeout.
Lance Zawadzki (former Memphis-Navojoa) entered late in the game as a pinch hitter and batted eighth.  0-for-1 at the plate.

Tommy Pham (St. Louis-Escogido) started in centerfield and batted eighth.  1-for-4 with one two-out RBI, one run, and two strikeouts.

Donovan Solano (former Memphis-Licey) started at second base and batted second.  0-for-4, one throwing error, and assisted in one double play.

Brayan Pena (St. Louis-Cibaenas) entered late in the game as designated hitter and batted fifth.  1-for-1 with one double and three two-out RBIs.

Notes:
Tommy Pham (St. Louis-Magallanes/Escogido) was on a short leash when he played for Magallanes and struggled to produce: LVBP Official Site

Ronald Ramirez (former Palm Beach-Barranquilla) started at shortstop and batted eighth.  0-for-4 with one ground into double play and one fielding error.
Dewin Perez (State College-Barranquilla) started and pitched 2.2 innings.  He allowed four hits, one earned run, two walks, and struck three out.  (p-s:45-25)
Jonathan Escudero (Palm Beach free agent-Barranquilla) entered in the third and pitched 2.1 innings.  He allowed no hits or runs, three walks, and struck four out for the winning decision (2-0).  (p-s:41-22)(ir-s:2-0)

Malik Collymore (former Johnson City-Sydney) started in centerfield and moved to left, batting second.  1-for-4 with one run, one walk, and one fielding error.