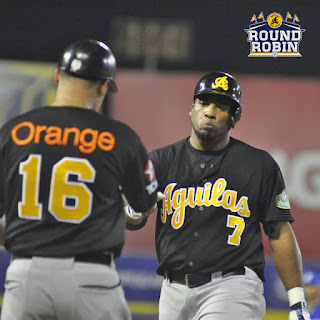 Ronny Cedeno (former MLB signing-Zulia) started at third base and batted ninth.  0-for-3 at the plate.

Notes:
Lara won the series over La Guaira four games to one and Zulia did the same against Caribes

Efren Navarro (former Memphis-Hermosillo) started at first base and batted third.  1-for-4 with two strikeouts.

Donovan Solano (former Memphis-Licey) started at third base and batted seventh.  2-for-3 with one two-out RBI, one hit by pitch, and assisted in one double play.

Tommy Pham (St. Louis-Escogido) started in centerfield and batted third.  0-for-4 with one strikeout.

Joel Pinerio (former St. Louis-Caguas) has not pitch since December 27, 2016 due to elbow soreness and would like to throw in the World Baseball Classic: El Nuevo Dia

Notes:
Schedule is set for the Latin American Series: LBPN Official Site
Posted by jrocke217 at 10:13 AM