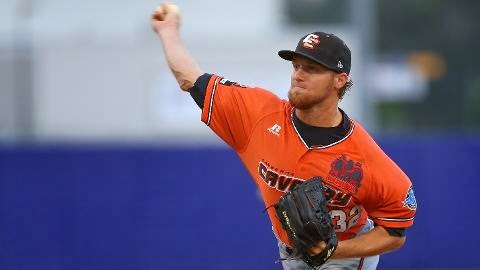 Joe Thurston (former St. Louis-La Guaira) started in center field and batted third.  1-for-4 with one RBI.
Rafael Ortega (St. Louis waiver claim-La Guaira) entered in the ninth as a pinch hitter and batted ninth.  One RBI and one walk.

Notes:
Teams moving on to the semifinals selected players from the clubs eliminated: LMP Official Site

Eugenio Velez (former Memphis-Licey) started in left field and batted fifth.  1-for-4 with one walk.
Jamie Romak (former Memphis-Licey) started in right field and batted sixth.  1-for-3 with one hit by pitch, one strikeout, and one fielding error.
Timo Perez (former St. Louis-Licey) entered in the sixth as a pinch hitter and batted eighth.  0-for-1 at the plate.
Maikel Cleto (former St. Louis-Licey) entered in the fifth and pitched 1.2 innings.  He allowed two hits, one earned run, two walks, and struck three out.  (g/f:0-1)
Victor Marte (St. Louis free agent-Licey) entered in the seventh and pitched one inning.  He allowed no hits or runs, and struck two out.

Jose Calero (former GCL-Sincelejo) entered in the seventh and pitched one inning.  He allowed one hit and no runs.

Notes:
A new system has been setup and a new rule added for the series: La Prensa

Notes:
Cuba announced their reinforcements for the tournament: Cuban-Play