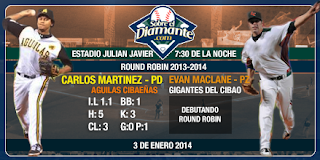 Joe Thurston (former St. Louis-La Guaira) started at third base and batted third.  3-for-5 with two RBIs (one w/two-outs) and one caught stealing.

Pedro Rodriguez (former MiLB signing-Caribes) entered in the ninth and pitched to six batters.  He allowed two hits, two earned runs, two walks (one intentional), and threw one wild pitch for the blown save (1).  (g/f:2-0)

Luis Garcia (former New Haven-Hermosillo) started as designated hitter and batted fifth.  1-for-4 with one run.
Fernando Salas (former St. Louis-Hermosillo) entered in the eighth and pitched one inning.  He allowed one hit, one earned run, one home run, and struck one out.  (p-s:15-8)

Russell Branyan (former St. Louis-Mexicali) started at first base and batted fourth.  2-for-4 with two doubles, two RBIs, one run, one strikeout, and assisted in two double plays.

Hugo Castellanos (former Memphis-Oluta) entered in the eighth and pitched one inning.  He allowed one hit, no runs, and struck two out.

Ivan Bellazetin (former MiLB tryout-Acayucan) started at second base and batted second.  1-for-5 with one strikeout.

Cibao has hired Mendy Lopez (Aguascalientes) as hitting coach during the Round Robin: Cibao Official Site

Danilo Sanchez (former Springfield-Azucareros) was one of the top hitters on Godo Knights in Italy: Mister Baseball

Brett Zawacki (former Springfield-Melbourne) entered in the ninth and pitched one inning.  He allowed no hits or runs, and struck one out for the save (6).  (p-s:11-8)(g/f:2-0)

IBAF agrees that there should be a limitation on players with professional experience in the Puerto Rican Double-A League: Primera Hora

Santurce owes nearly $70,000 to its managers and players: Primera Hora

Brandon Dickson (former St. Louis-Orix) is a candidate for opening day starter: Yakyubaka
Posted by jrocke217 at 9:55 AM