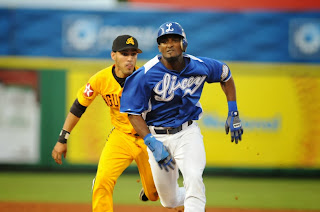 Pedro Rodriguez (former MiLB signing-Caribes) entered in the ninth and pitched one inning.  He allowed one hit and no runs.  (p-s:13-8)(g/f:1-1)

Dustin Richardson (Anaheim free agent-Aguilas/Magallanes) is hoping to get an invite to spring training: Lider

Luis Gacia (former New Haven-Hermosillo) started as designated hitter and batted fifth.  1-for-4 with one double, one run, and one strikeout.
Dennys Reyes (former St. Louis-Hermosillo) entered in the sixth and pitched 1.1 innings.  He allowed two hits, no runs, and struck one out.  (p-s:15-11)(g/f:3-0)

Russell Branyan (former St. Louis-Mexicali) started at first base and batted fourth.  1-for-2 with one home run, two two-out RBIs, one run, three walks, and one strikeout.

Ivan Bellazetin (former MiLB tryout-Acayucan) started at second base and batted second.  2-for-4 with one run and one walk.

Hugo Castellanos (former Memphis-Oluta) entered in the seventh and pitched 1.1 innings.  He allowed no hits or runs, hit one batter, and struck one out.

Ryan Mulhern (former 2002 draft selection-San Andres) started as designated hitter and batted fourth.  2-for-4 with one run and one stolen base.

Hector Luna (former St. Louis-Aguilas) started as designated hitter and batted fourth.  0-for-4 at the plate.

Eugenio Velez (former Memphis-Licey) started in right field and batted eighth.  3-for-4 with three RBIs (two w/two-outs), one caught stealing, and one outfield assist.
Victor Marte (St. Louis free agent-Licey) entered in the eighth and pitched to four batters.  He allowed one hit, no runs, and one walk for the hold (1).  (g/f:1-0)

Evan MacLane (former St. Louis-Cibao) entered in the eighth and pitched to one batter.  He allowed one hit and no runs.  (ir-s:2-1)

Notes:
Vicente Padilla (Softbank free agent-Chinandega) has received offers from a National League and Japanese team for spring training, but turned them down due to his injury: La Prensa

Luis Mateo (Springfield-Caguas) started at shortstop and batted ninth.  1-for-2 with one strikeout and one throwing error.

Randy Ruiz (former MiLB signing-Mayaguez) started as designated hitter and batted fourth.  3-for-4 with one RBI and one strikeout.
Luis Montanez (former Memphis-Mayaguez) started in right field and batted ninth.  2-for-3 with two doubles, one RBI, and one run.
Tyler Herron (former Springfield-Mayaguez) entered in the eighth and pitched 1.1 innings.  He allowed two hits, one earned run, one walk, and struck two out for the blown save (1) and winning decision (2-0).  (g/f:1-0)(ir-s:2-2)

Notes:
The Puerto Rican Double-A League will not changed their stance on how many professionally experiences players are on teams and could be disaffiliated by the IBAF: Primera Hora