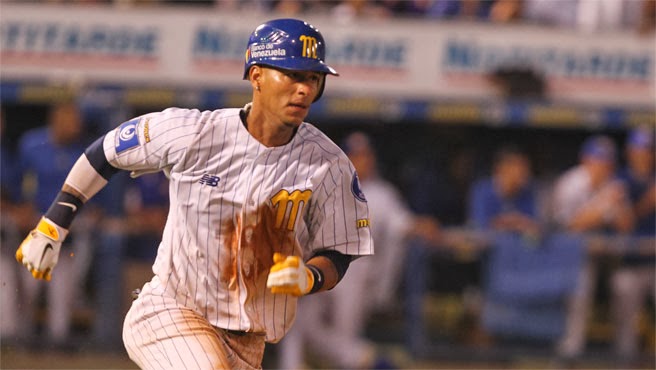 Joe Thurston (former St. Louis-La Guaira) started at third base and batted third.  1-for-4 with one double, one RBI, and two strikeouts.
Rafael Ortega (St. Louis waiver claim-La Guaira) entered in the ninth in left field.

Notes:
Raul Valdes (former St. Louis-Azucareros/Escogido) has been given clearance to start after injuring himself in last outing: LIDOM Official Site

Ruben Gotay (former Memphis-Carolina) started at third base and batted third.  1-for-3 with one walk, one stolen base, and one strikeout.
Anthony Garcia (Palm Beach-Carolina) started in right field and batted fourth.  2-for-3 with one double, one run, one walk, and one strikeout.
David Kopp (former Memphis-Carolina) entered in the ninth and pitched to one batter.  He allowed no hits or runs for the save (1).  (g/f:1-0)(ir-s:1-0)

Ronald Ramirez (former Palm Beach-Cartagena) started at first base and batted ninth.  0-for-3 with one strikeout.

Jose Calero (former GCL-Sincelejo) entered in the sixth and pitched 1.1 innings.  He allowed one hit, no runs, one walk, threw one wild pitch, and struck one out.

Boston has invited Hideyoshi Otake (Toyama) to minor league camp: Yakyubaka
Posted by jrocke217 at 9:10 AM