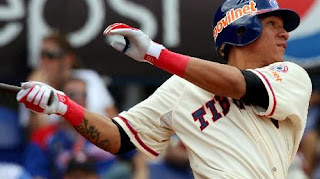 Joe Thurston (former St. Louis-La Guaira) started in center field and moved to third base, batting third.  0-for-3 with one hit by pitch.
Rafael Ortega (St. Louis waiver claim-La Guaira) entered in the seventh as a pinch hitter and took over in center field, batting ninth.  1-for-1 with one two-out RBI and one outfield assist.

Ivan Bellazetin (former MiLB tryout-Acayucan) started at second base and batted second.  0-for-5 with one strikeout.

Notes:
Carlos Gonzalez (former Johnson City) has been hired on as pitching coach for Veraguas and is also a scout for Houston.