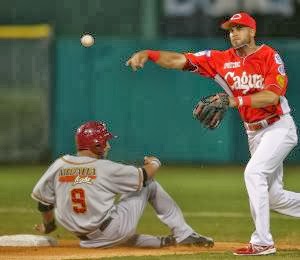 Pedro Rodriguez (former MiLB signing-Caribes) entered entered in the ninth and pitched one inning.  He allowed one hit, no runs, and struck one out.  (g/f:0-1)

Ronny Cedeno (former St. Louis-Magallanes) started at shortstop and batted ninth.  2-for-3 with two doubles, one RBI, one sac fly, and assisted in two double plays.

Notes:
Pete Parise (former Memphis-Ponce) has signed on to pitch for Caribes after Ponce was eliminated from the Puerto Rican playoffs: El Universal

Luis Garcia (former New haven-Hermosillo) started as designated hitter and batted sixth.  2-for-5 with one RBI, one run, and one strikeout.

Eugenio Velez (former Memphis-Licey) started at right field and batted eighth.  1-for-3 with one run and grounded into one double play.

Amaury Cazana (former Memphis-Boer) 1-for-4 with one double, two RBIs, and one sac fly.

Notes:
Rivas will represent Nicaragua in the 2014 Latin American Series.

Aaron Bates (former Memphis-Caguas) entered in the sixth as designated hitter and batted sixth.  2-for-2 with one RBI.
Luis Mateo (Springfield-Caguas) started at shortstop and batted ninth.  2-for-4 with one two-out RBI, one fielding error, and assisted in one double play.

Jonathan Rivera (St. Louis international signing-Herrera) entered late in the game in the outfield and batted seventh.  2-for-2 with one triple, one run, and two walks.

Cienfuegos has released infielders Pavel Quesada and Yoan Manuel Moncada: Cuban-Play
Posted by jrocke217 at 9:45 AM