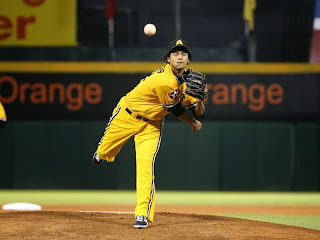 Joe Thurston (former St. Louis-La Guaira) started in left field and batted third.  2-for-4 with one RBI, one run, one outfield assist, and assisted in one double play.

Pedro Rodriguez (former MiLB signing-Caribes) entered in the in the ninth and pitched one inning.  He allowed no hits or runs, and struck two out for the save (1).  (g/f:0-1)

Tim Corcoran (Yokohoma-Aguilas) has signed on to pitch for Caracas: Lider

Ryan Mulhern (former 2002 draft selection-San Andres) started as designated hitter and batted fourth.  1-for-2 with one run, two walks, and one strikeout.

Jem Argenal (former GCL-Chinandega) 0-for-4 with one walk and one sacrifice.
Edgard Montiel (former DSL-Chinandega) 2-for-5 with one RBI and one run.

Randy Ruiz (former MiLB signing-Mayaguez) started as designated hitter and batted fourth.  1-for-5 with one double, one RBI, one run, and one strikeout.
Luis Montanez (former Memphis-Mayaguez) started in right field and batted ninth.  0-for-3 with one sacrifice.
Tyler Herron (former Springfield-Mayaguez) entered in the tenth and pitched two innings.  He allowed two hits, no runs, two walks (one intentional), and struck three out for the winning decision (1-0).  (g/f:2-1)

Aaron Bates (former Memphis-Caguas) started at first base and batted sixth.  2-for-4 with one run and one walk.
Luis Mateo (Springfield-Caguas) started at shortstop and batted ninth.  0-for-4 with one strikeout.
Shaun Garceau (former Springfield-Caguas) entered in the first and pitched 3.2 innings.  He allowed four hits, no runs, committed one pickoff error, and struck one out.  (g/f:4-4)(ir-s:3-0)

Ronald Ramirez (former Palm Beach-Cartagena) entered late in the game at shortstop and batted leadoff.  0-for-1 with one sacrifice.
Jolbert Cabrera (former Memphis-Cartagena) started at first base and batted fourth.  0-for-4 at the plate.