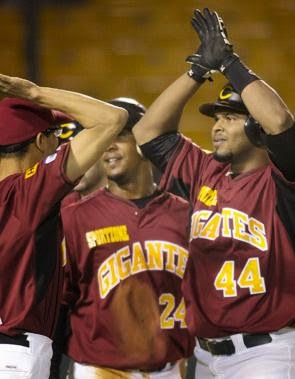 Pedro Rodriguez (former MiLB signing-Caribes) entered in the ninth and pitched one inning.  He allowed no hits or runs for the save (3).  (g/f:1-1)

Eugenio Velez (former Memphis-Azucareros) entered late in the game as a pinch hitter and batted sixth.  0-for-1 at the plate.

Eliezer Alfonso (former Peoria-Cibao) started at first base and batted seventh.  0-for-3 and assisted in two double plays.

Edgard Montiel (former DSL-Chinandega) started at third base and batted seventh.  2-for-3 with one run, one walk, and one strikeout.

Anthony Garcia (Palm Beach-Carolina) started in right field and batted fourth.  1-for-4 with one home run, four RBIs (two w/two-outs), one run, and two sac flies.
J.C. Romero (former St. Louis-Carolina) entered in the eighth and pitched one inning.  He allowed no hits or runs.  (g/f:1-1)

Ruben Gotay (former St. Louis-Santurce) started as designated hitter and batted third.  0-for-3 with one run, two walks, and three strikeouts.
Jonathan Rodriguez (Memphis-Santurce) entered late in the game as a pinch hitter and took over in right field, batting ninth.  0-for-1 at the plate.

Luis Montanez (former Memphis-Mayaguez) started in right field and batted second.  2-for-5 with one double, two RBIs, and one run.
Randy Ruiz (former MiLB signing-Mayaguez) started as designated hitter and batted fifth.  1-for-3 with one run and one walk.
Tyler Herron (former Springfield-Mayaguez) entered in the eighth and pitched one inning.  He allowed no hits or runs for the hold (1).  (g/f:1-1)

Joe Thurston (former St. Louis-Caguas) started in right field and batted eighth.  1-for-2 with one double.

Notes:
MLB scouts said there is some quality of talent as they watched the Colombian Developmental League All-Star showcase: El Universal

Allen Cordoba (DSL-Urraca) entered late in the game at second base and batted second.  0-for-1 with one strikeout.

Cuba is open to lending their players to the MLB, much like they do in Asia.  The country has their permits ready for the Caribbean Series.  Confirmed Yunieski Garcia Valera (Artemis) and Guillermo Heredia (Matanzas) have defected from the country.  Julio Alfredo Martinez and Lorenzo Quintana (Pinar del Rio) have both been punished for trying to escape: Cafe Fuerte

KBO clubs are set to begin their spring training outside Korea: Korea Times
Posted by jrocke217 at 10:50 AM