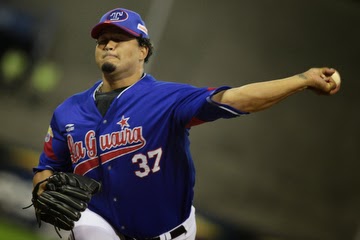 Notes:
Johan Santana (Baltimore free agent-Magallanes) could start the fifth game of the championship round: Lider

C.J. Beatty (former Palm Beach-Brisbane) started at third base and batted sixth.  1-for-3 with one walk.

Jonathan Escudero (Johnson City-Barranquilla) saw some action as Barranquilla was pounded on 13-1 by Monteria and claimed the championship four games to one: El Heraldo

Guillermo Heredia (Matanzas free agent) is thought to be in Mexico: El Neuvo Herald
Posted by jrocke217 at 9:55 AM