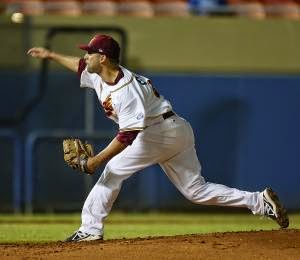 Ronny Cedeno (former St. Louis-Magallanes) started at shortstop and batted second.  1-for-4 with one sacrifice, one throwing error, and assisted in two double plays.

Jose Martinez (former Springfield-Aragua) started at second base and batted sixth.  2-for-4 with one double, one two-out RBI, and and one run.
Jorge Rondon (former St. Louis-Aragua) entered in the sixth and pitched 1.1 innings.  He allowed two hits, no runs, one intentional walk, and struck one out.  (g/f:1-1)

Several players from Zulia were suspended after comments during the week: El Emergente

Eliezer Alfonso (former Peoria-Cibao) started as designated hitter and batted eighth.  1-for-4 with one home run, one two-out RBI, one run, and one strikeout.
Nick Additon (former Memphis-Cibao) started and pitched 2.2 innings.  He allowed seven hits, five earned runs, and one walk.  (g/f:6-1)

Omar Javier (former Johnson City-Estrellas) entered in the seventh and pitched two innings.  He allowed no hits or runs.  (g/f:4-1)

Ruben Gotay (former Memphis-Santurce) started at third base and batted third.  1-for-2 with one RBI and one sac fly.

Luis Montanez (former Memphis-Mayaguez) entered late in the game as a pinch runner and took over in right field, batting fifth.  1-for-1 at the plate.
Randy Ruiz (former MiLB signing-Mayaguez) started as designated hitter and batted fifth.  0-for-4 with one sacrifice and one strikeout.
Pete Parise (former Memphis-Mayaguez) started and pitched 6.2 innings.  He allowed seven hits, one earned run, one walk, and struck three out.  (g/f:8-6)

Anthony Garcia (Palm Beach-Carolina) started in right field and batted fourth.  1-for-4 with one run, one hit by pitch, and, one strikeout.
J.C. Romero (former St. Louis-Carolina) entered in the ninth and pitched one inning.  He allowed two hits, no runs, and struck one out.  (g/f:1-0)

No Games Scheduled Until Tuesday
Posted by jrocke217 at 8:30 AM