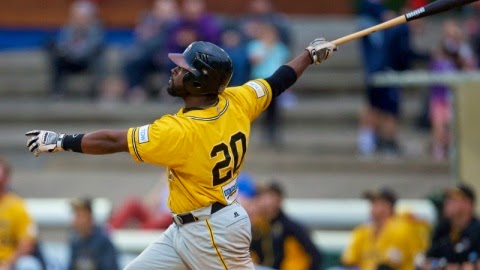 Kristhiam Linares (former Springfield-Zulia) entered in the fifth and pitched one inning.  He allowed three hits, three runs (one earned), one walk, and struck one out for the losing decision (0-1).  (g/f:3-0)

Jose Martinez (former Springfield-Aragua) started at second base and batted leadoff.  1-for-3 with one RBI and one run.

Jorge Rondon (former St. Louis-Aragua) received his award for Set-Up Man of the Year, he did attend ceremony: El Universal

Dennys Reyes (former St. Louis-Culiacan) entered in the ninth and pitched to one batter.  He allowed no hits or runs, and struck one out.  (p-s:5-3)

C.J. Beatty (former Palm Beach-Brisbane) started at third base and batted sixth.  3-for-4 with one double, one triple, and one two-out RBI.

Randy Ruiz (former MiLB signing-Mayaguez) started as designated hitter and batted fourth.  1-for-6 with one strikeout and grounded into one double play.
Luis Montanez (former Memphis-Mayaguez) started in right field and batted seventh.  0-for-4 with one RBI, one sac fly, and one strikeout.
Tyler Herron (former Springfield-Mayaguez) entered in the 13th and pitched to seven batters.  He allowed three hits, one earned run, and one walk for the losing decision (1-2).  (g/f:2-0)