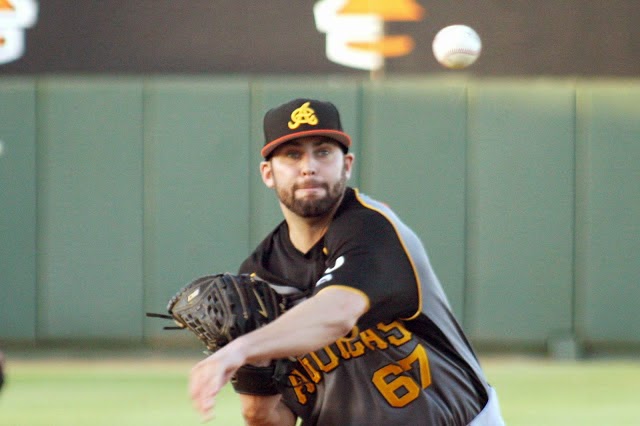 Jose Martinez (former Springfield-Aragua) started at second base and batted fourth.  0-for-4 and assisted in one double play.

Pedro Rodriguez (former MiLB signing-Caribes) entered in the ninth and pitched one inning.  He allowed no hits or runs, and struck two out for the save (2).  (g/f:0-1)

Ronny Cedeno (former St. Louis-Magallanes) started at shortstop and batted seventh.  2-for-4 with two two-out RBIs, one sacrifice, and one throwing error.

Notes:
St. Louis has pulled Breyvic Valera (Springfield) from continuing to play with Magallanes in the postseason: Eduardo Caldren Twitter

Justin Christian (former Memphis-Mochis) started in left field and moved to right, batting seventh.  2-for-5 with one home run, one RBI, one run, and one strikeout.

Notes:
Jalisco swept the best of seven series in four games over Mazatlan.

Eugenio Velez (former Memphis-Azucareros) entered late in the game as a pinch hitter and took over in right field, batting leadoff.  1-for-2 at the plate.

Matt Pagnozzi (former St. Louis-Estrellas) started at catcher and batted ninth.  1-for-3 with two runs, one walk, one strikeout, one throwing error, and allowed one stolen base.

The additions of Ruben Gotay (former Memphis-San Juan) and others have helped put Santurce in solid contention: El Nuevo Dia

Ronald Ramirez (former Palm Beach) scored one run as Cartagena beat Sincelejo 4-2 and eliminated them from the postseason: El Meridiano

Ryde Rodriguez (former Palm Beach-Acayucan) started in left field and batted fourth.  1-for-5 with one strikeout.

Allen Cordoba (DSL-Urraca) started at second base and batted second.  1-for-3 with one walk and committed one error.

Nippon Ham will look at Shohei Otani as pitcher first then consider him for designated hitter and outfielder next: Yakyubaka

Doosan signed Kim Hyun-Soo to an extension: Korea Times
Posted by jrocke217 at 10:55 AM