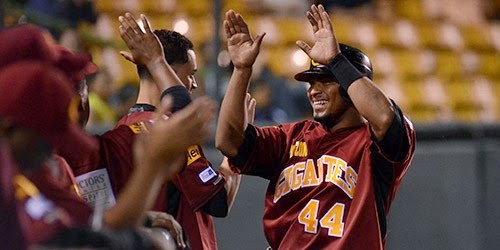 Pedro Rodriguez (former MiLB signing-Caribes) entered in the ninth and pitched one inning.  He allowed no hits or runs for the save (5).  (g/f:0-2)

Russell Branyan (former St. Louis-Culiacan) started as designated hitter and batted fifth.  0-for-4 with one hit by pitch and  one strikeout.

Wayne Lundgen (former Palm Beach-Sydney) entered in the sevent and pitched to three batters.  He allowed two hits, one earned run, and one walk.  (p-s:8-3)

C.J. Beatty (former Palm Beach-Brisbane) started at third base and batted eight.  1-for-4 with one double, one run, one strikeout, and two throwing errors.

Joe Thurston (former St. Louis-Caguas) started in left field and batted eighth.  1-for-3 with one strikeout.

Anthony Garcia (Palm Beach-Carolina) started in right field and batted fourth.  2-for-2 with one RBI, two runs, and two walks.

Randy Ruiz (former MiLB signing-Mayaguez) started as designated hitter and batted fifth.  1-for-5 with one run, one strikeout, and grounded into one double play.
Luis Montanez (former Memphis-Mayaguez) started in left field and batted ninth.  1-for-4 with one run, one strikeout, and one fielding error.
Tyler Herron (former Springfield-Mayaguez) entered in the 11th and pitched to four batters.  He allowed two hits, one unearned run, and one walk for the losing decision (1-1).  (g/f:1-0)

Shunsuke Watanabe and Yusuke Kajimota both want to return to Lancaster (Atlantic League): Yakyubaka
Posted by jrocke217 at 9:15 AM