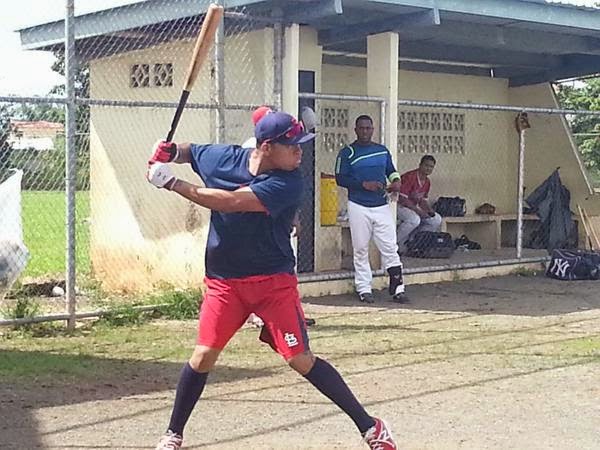 Pedro Rodriguez (former MiLB signing-Caribes) entered in the ninth and pitched one inning.  He allowed two hits and no runs for the save (4).  (g/f:2-0)

Jose Martinez (former Springfield-Aragua) started at second base and batted seventh.  1-for-2 with one run, one walk, one fielding error, and assisted in one double play.

Eliezer Alfonso (former Peoria-Cibao) started at first base and batted seventh.  0-for-4 with one strikeout and grounded into one double play.

Evan MacLane (former St. Louis-Estrellas) started and pitched six innings.  He allowed three hits, no runs, one walk, and struck five out for the winning decision (2-0).  (g/f:6-0)
Omar Javier (former Johnson City-Estrellas) entered in the eighth and pitched one inning.  He allowed no hits or runs, and struck two out.  (g/f:1-0)

Edgard Montiel (former DSL-Chinandega) started at third base and batted seventh.  0-for-4 with one strikeout and grounded into one double play.

Ruben Gotay (former Memphis-Santurce) Started as designated hitter and batted third.  1-for-4 with one home run, two RBIs (one w/two-outs), and one run.
Jonathan Rodriguez (Memphis-Santurce) entered late in the game as a pinch hitter and batted fifth.  0-for-1 with one strikeout.
Ivan Maldonando (former MiLB tryout-Santurce) started and pitched five innings.  He allowed four hits, three runs (one earned), one home run, and one walk for the losing decision (1-2).  (g/f:9-5)
Pedro Feliciano (former Memphis-Santurce) entered in the seventh and pitched to one batter.  He allowed no hits or runs.  (g/f:1-0)(ir-s:3-0)

Anthony Garcia (Palm Beach-Carolina) started in right field and batted fourth.  1-for-3 with one run and one walk.
J.C. Romero (former St. Louis-Carolina) entered in the ninth and pitched one inning.  He allowed one hit, no runs, and struck two out for the save (1).  (g/f:1-0)

Pinar del Rio has not yet received permission from OFAC to participate in the Caribbean Series: Diario de Cuba