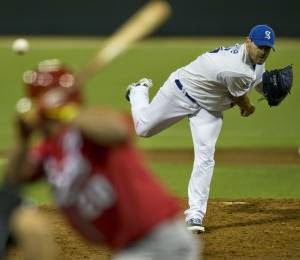 Ronny Cedeno (former St. Louis-Magallanes) started at shortstop and batted second.  2-for-5 with one RBI, two runs, and assisted in two double plays.

Hugo Castellanos (former Memphis-Jalisco) entered in the sixth and pitched one inning.  He allowed no hits or runs, and struck two out for the hold (2).  (p-s:13-8)

Nick Greenwood (St. Louis-Cibaenas) entered in the fifth and pitched one inning.  He allowed one hit, one unearned run, and threw one wild pitch.  (g/f:2-1)

Eugenio Velez (former Memphis-Azucareros) started as designated hitter and batted seventh.  2-for-3 with one RBI, one sac fly, and one caught stealing.

Eliezer Alfonso (former Peoria-Cibao) started at first base and batted sixth.  2-for-4 with one double, one home run, one two-out RBI, two runs, and assisted in one double play.

Jem Argenal (former GCL-Chinandega) entered late in the game in centerfield and batted fifth.  1-for-3 with one RBI.
Edgard Montiel (former DSL-Chinandega) started at third base and batted eighth.  2-for-5 at the plate.

Wayne Lundgren (former Palm Beach-Sydney) entered in the sixth and pitched two innings.  He allowed two hits, no runs, hit one batter, and struck one out.  (p-s:27-15)(g/f:3-0)

C.J. Beatty (former Palm Beach-Brisbane) started as designated hitter and batted seventh.  0-for-3 with one walk and one strikeout.

Ruben Gotay (former Memphis-Santurce) started at second base and batted third.  1-for-4 with one run and two strikeouts.
Joel Pineiro (former St. Louis-Santurce) started and pitched six innings.  He allowed four hits, one earned run, one home run, one walk, and struck one out for the winning decision (3-0).  (g/f:6-7)
Pedro Feliciano (former Memphis-Santurce) entered in the seventh and pitched two innings.  He allowed no hits or runs, and struck two out for the hold (3).  (g/f:2-0)

Anthony Garcia (Palm Beach-Carolina) started in right field and batted fourth.  1-for-4 at the plate.
J.C. Romero (former St. Louis-Carolina) entered in the ninth and pitched to two batters.  He allowed one hit and no runs for the save (2).  (g/f:1-0)(ir-s:2-1)

Luis Montanez (former Memphis-Mayaguez) started in right field and batted second.  1-for-3 with one double and one sacrifice.
Randy Ruiz (former MiLB signing-Mayaguez) started as designated hitter and batted fifth.  0-for-3 with three strikeouts.
Tyler Herron (former Springfield-Mayaguez) entered in the eighth and pitched to one batters.  He allowed no hits, one unearned run, hit one batter, and was ejected.
Lino Rivera (former Arkansas-Mayaguez MGR) was ejected in the eighth.

Notes:
Double-A League will file an appeal if disaffiliated from the IBAF: El Nuevo Dia

Notes:
Monteria eliminated Cartagena with an 11-1 win on Wednesday and will face Barranquilla in the championship: El Meridiano

Alberto Torres is a top left-handed pitcher and can also hit: El Universal

Nettuno 2 will be bringing back Norberto Gonzalez (Cienfuegos): Mister Baseball
Posted by jrocke217 at 10:30 AM