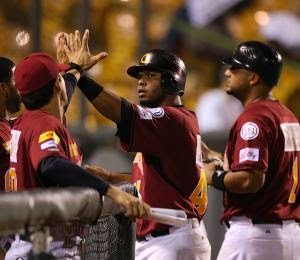 Ronny Cedeno (former St. Louis-Magallanes) started at shortstop and batted second.  4-for-6 with one double, one RBI, and two runs.

Jose Martinez (former Springfield-Aragua) started at second base and batted second.  1-for-5 with one double, two RBIs, one walk, one strikeout, and assisted in one double play.
Jorge Rondon (former St. Louis-Aragua) entered in the sixth and pitched 1.2 innings.  He allowed one hit, no runs, and struck one out.  (g/f:2-1)

Russell Branyan (former St. Louis-Culiacan) entered late in the game as a pinch hitter and took over at first base, batting ninth.  0-for-2 at the plate.

Eliezer Alfonso (former Peoria-Cibao) started at first base and batted eighth.  1-for-2 with one run and one hit by pitch.

Eugenio Velez (former Memphis-Azucareros) started in left field and batted seventh.  1-for-3 with one run.

Audry Perez (former St. Louis-Cibaenas) started at catcher and batted ninth.  2-for-3 with one double, one two-out RBI, and threw out one of three base runners.
Luis De La Cruz (former Memphis-Cibaenas) entered late in the game at catcher and batted ninth.  1-for-1 at the plate.
Carlos Martinez (St. Louis-Cubaenas) started and pitched 5.2 innings.  He allowed six hits, three runs (one earned), one walk, and struck eight out for the winning decision (2-0).  (g/f:7-1)
Nick Greenwood (St. Louis-Cibaenas) entered in the sixth and pitched to one batter.  He allowed no hits or runs for the hold (1).  (g/f:1-0)(ir-s:1-0)

C.J. Beatty (former Palm Beach-Brisbane) started at third base and batted eighth.  1-for-3 with one run and one walk.

Yokohama still has not finalized a contract with Yulieski Gourriel (La Habana): Yakyubaka

Lenny Randle (former 1967 draft selection) will be in a supervisor role for Nettuno: Mister Baseball
Posted by jrocke217 at 11:10 AM