Cardinals Winter League Notebook 1-7-15: Justin Christian Doubles & Drives In One Run; Ryde Rodriguez Collects Two Singles & One RBI; Dennys Reyes Strikes Out One Over One & A Third Hitless/Scoreless Innings For The Win 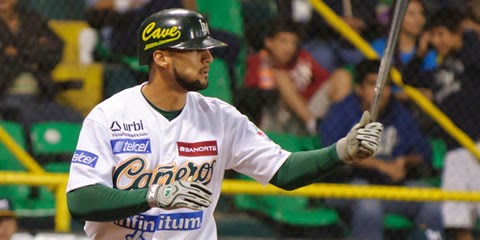 Jose Martinez (former Springfield-Aragua) started at second base and batted fourth.  0-for-4 with one run, one hit by pitch, and assisted in two double plays.
Jorge Rondon (former St. Louis-Aragua) entered in the sixth and pitched to five batters.  He allowed two hits, three earned runs, one home run, one walk, and struck two out.  (ir-s:1-0)

Notes:
Johan Santana (Baltimore free agent) was added to the Magallanes active roster and is set to pitch on Thursday: El Universal

Justin Christian (former Memphis-Mochis) started in right field and batted third.  1-for-4 with one double, one RBI, and one strikeout.

Jose Garcia (former Memphis-San Fernando) started at second base and batted leadoff.  1-for-4 with one RBI and one run.

Anthony Garcia (Palm Beach-Carolina) started in right field and batted fourth.  1-for-4 at the plate.
J.C. Romero (former St. Louis-Carolina) entered in the ninth and pitched to three batters.  He allowed one hit and no runs.  (g/f:0-2)(ir-s:2-2)

Ryde Rodriguez (former Palm Beach-Acayucan) started in left field and batted fourth.  2-for-4 with one RBI and one strikeout.

Edmundo Sosa (State College-Metro) started at shortstop and batted leadoff.  0-for-3 with one walk.

Alen Cordoba (DSL-Urraca) started at second base and batted second.  0-for-3 with one RBI and one run.

Rakuten is interested in Andrew Brown (former St. Louis): Yakyubaka
Posted by jrocke217 at 11:40 AM