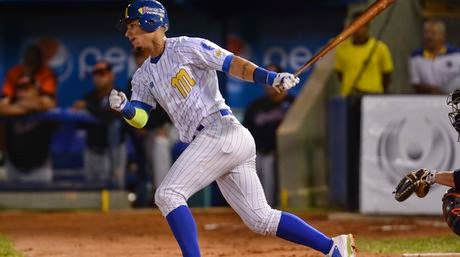 Ronny Cedeno (former St. Louis-Magallanes) started at shortstop and batted second.  3-for-5 with two RBIs (one w/two-outs), one run, one strikeout, and assisted in two double plays.

Jose Martinez (former Springfield-Aragua) started at second base and batted sixth.  1-for-4 with one two-out RBI.
Jorge Rondon (former St. Louis-Aragua) entered in the seventh and pitched to four batters.  He allowed one hit, two earned runs, one walk, and struck one out for the hold (1).  (g/f:1-0)(ir-s:2-0)
Luis Perdomo (former Springfield-Aragua) entered in the eighth and pitched to two batters.  He allowed one hit, no runs, and one walk.  (ir-s:2-1)

Johan Santana (Baltimore free agent-Magallanes) is not scheduled for another start due to fatigue: Lider

Eliezer Alfonso (former Peoria-Cibao) started at first base and batted seventh.  0-for-4 with one strikeout and assisted in one double play.

Anthony Garcia (Palm Beach-Carolina) started in right field and batted fourth.  1-for-4 with one strikeout.

Randy Ruiz (former MiLB signing-Mayaguez) started as designated hitter and batted fifth.  1-for-3 with one home run, one RBI, one run, and one strikeout.
Luis Montanez (former Memphis-Mayaguez) started left field and moved to right, batting seventh.  0-for-2 with one walk.

Jan. 16 (Regular Season):
Allen Cordoba (DSL-Urraca) entered late in the game at shortstop and batted fifth.  0-for-2 at the plate.